It is rarely the case that we can not only identify the person represented by a headless bust, but it is also possible to reconstruct the facial features and tell the time of its creation with a few years of accuracy. This is exactly what happened to the bust on display in the third exhibition of our Mouseion series, on view from 3 September 2019 until 23 February 2020, and presented here by classical archaeologist Hans Rupprecht Goette.

Hadrian’s ascension to the throne
In August 117 AD, the sixty-four-year-old Roman emperor Trajan left the Levant where he had campaigned since 113 AD against several peoples in the Middle East (in Parthia, Armenia, Assyria, Mesopotamia). Feeling sick, he boarded a ship bound for Rome, leaving one of his generals, Hadrian, in Syria to suppress a Jewish revolt. A few days after his departure, on 8 August 117, at Selinus in Cilicia on the southern coast of Turkey, the journey halted when Trajan died of a stroke. He was incinerated, and a mausoleum, a cenotaph, was built there, while his ashes were sent back to Rome, where they were buried in the base of the marble column depicting his military achievements in a long, spiral relief band.
It is not clear if and how Trajan arranged his succession. Ancient authors recount rumors of Hadrian having been officially adopted as heir by Trajan as he lay on his deathbed; Hadrian was married to Trajan’s grandniece and was from Trajan’s hometown in Spain. Other ancient written sources state that Hadrian simply claimed to have been designated by Trajan as the new emperor. Whichever was true, Hadrian had his military legions on his side and was therefore well-prepared to take over power and the imperial throne.

Portrait types of Hadrian
Hadrian’s accession became known throughout the Roman Empire even before Hadrian returned to Rome, and some cities declared their loyalty to him by minting coins with the image of him as the new emperor. The civic officials of Alexandria in Egypt, for example, struck coins with the profile image of a young man’s head with curly hair and distinct sideburns encircled by letters naming Hadrian, and some of these coins depicted the deified Trajan on the reverse.

In other parts of the empire, Hadrian appeared differently: longer, wavy strands of hair were combed to the front and terminated in small curls framing the forehead, and he sported a trimmed, short beard, which completely covered his cheeks and chin.

This serious-looking image is also known from many portraits in the round chiseled in marble or, less often preserved because the metal was melted and re-used for other purposes, cast in bronze.

These portraits were combined with full statues wearing various outfits – the Roman garment of civilians (toga), the military cuirass with a cloak (paludamentum) around the shoulders, the Greek mantle (himation) – and even nude, thus likening the emperor to images of heroes and gods, such as Mars. 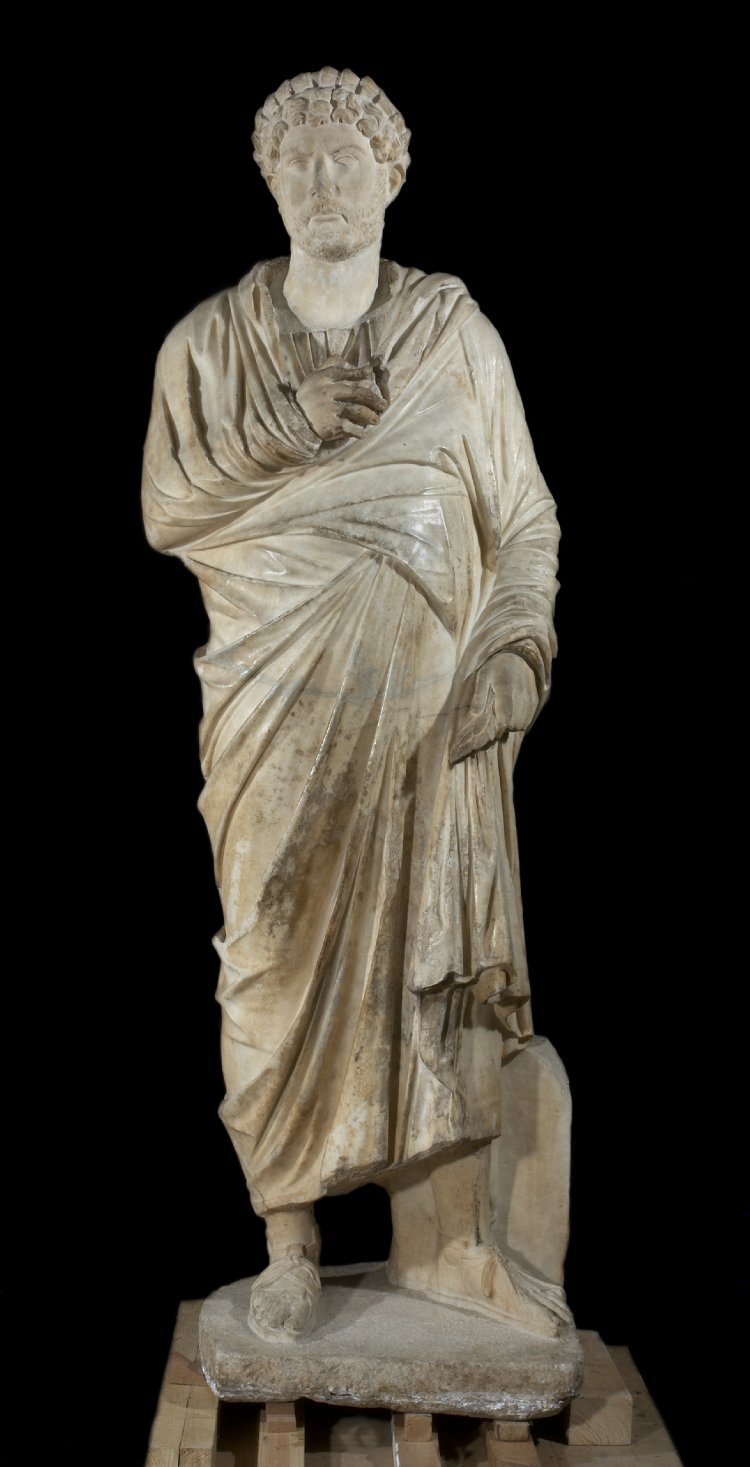 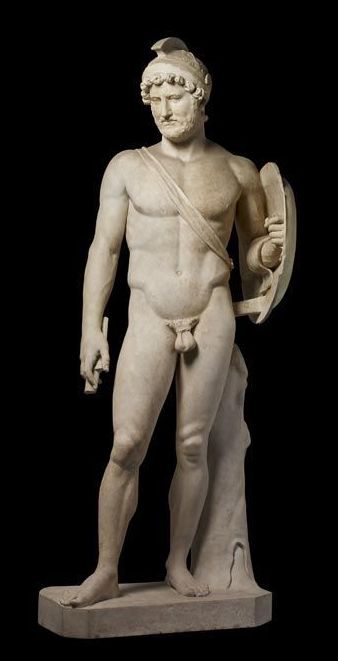 The bust in Budapest
Aside from the full statues, we know of abbreviations of such images, specifically busts, that is, an image that depicts the upper body from the head down to the pectoral muscles. These busts often sit on a small plate framed by volutes, the so-called tabula ansata, which was the place to be inscribed with the name of the person depicted. One example, the piece introduced here, was acquired by the Collection of Classical Antiquities of the Museum of Fine Arts in 1908 from the Munich-based classical archaeologist and antiquities dealer, Paul Arndt, who had purchased the bust in Rome. It shows the upper part of a male wearing only a puff of drapery belonging to a general’s cloak (paludamentum) over his left shoulder, where it is decorated with a clasp. Two intertwined leather cords of a baldric pass diagonally from his right shoulder to his left side, denoting his status as a military man; in addition, the nakedness of the body points to some heroic assimilation of the sitter. Therefore, the partial nudity and the baldric signify that the subject wished to be portrayed as a heroic soldier, emphasizing his military virtue.
The head that once belonged to the bust is broken off and lost; the missing base of the bust had been worked separately and fixed by a dowel to the pillar support behind the tabula ansata. While the back of the bust is covered by root marks and some sinter, the front has been mostly cleaned, probably with acid. On the surface of the garment and at a small point on the breast there are remains of red-brown rust of some metal that lay on top of the piece while it was covered by soil. The remains of the neck and the muscles of the shoulders next to it clearly show that the head was turned to his left side, suggesting dynamic movement. On the basis of the size and form of the abbreviated body, as well as the stylistic features of the paludamentum, the Budapest bust can be dated to the Hadrianic period (120–140 AD). 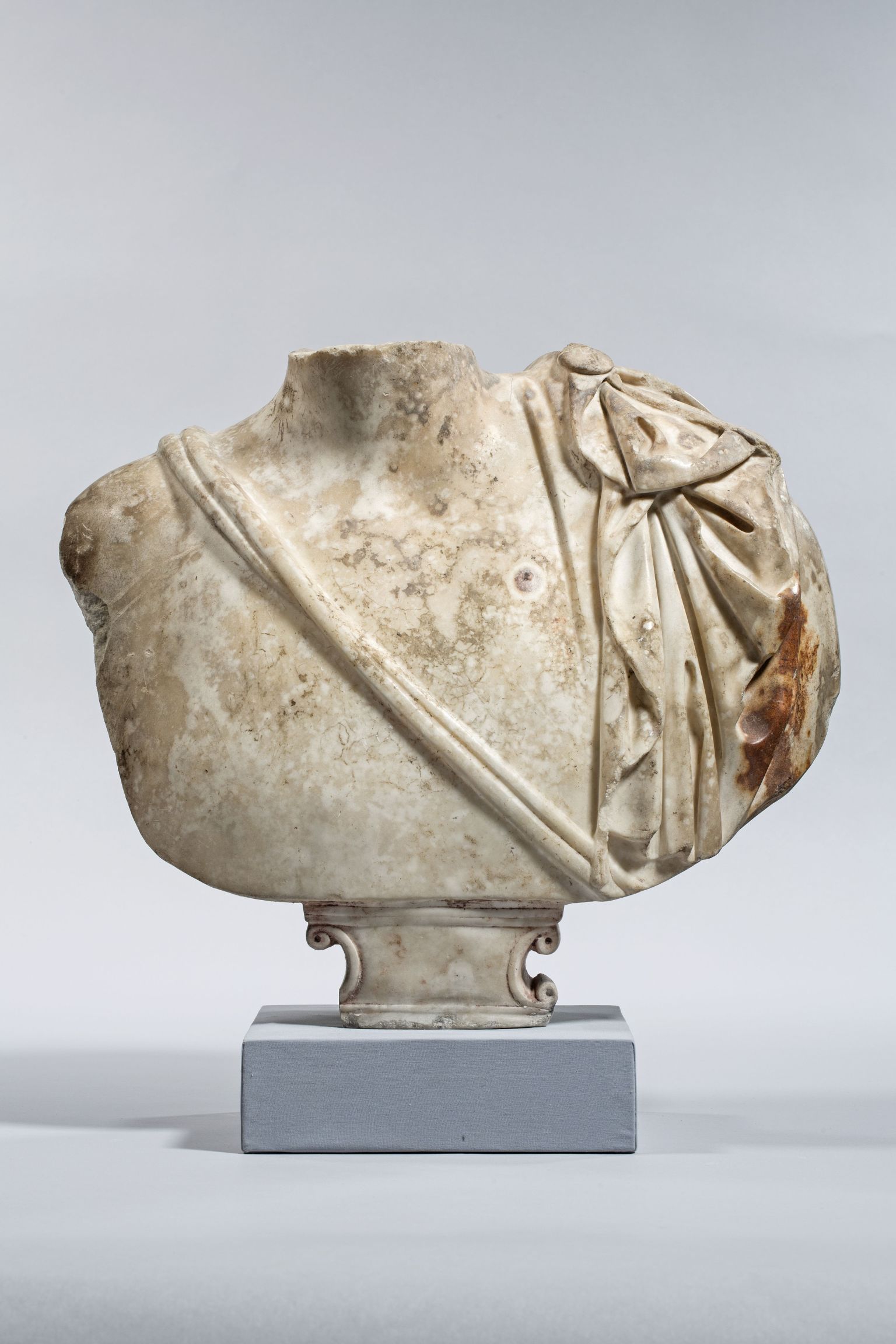 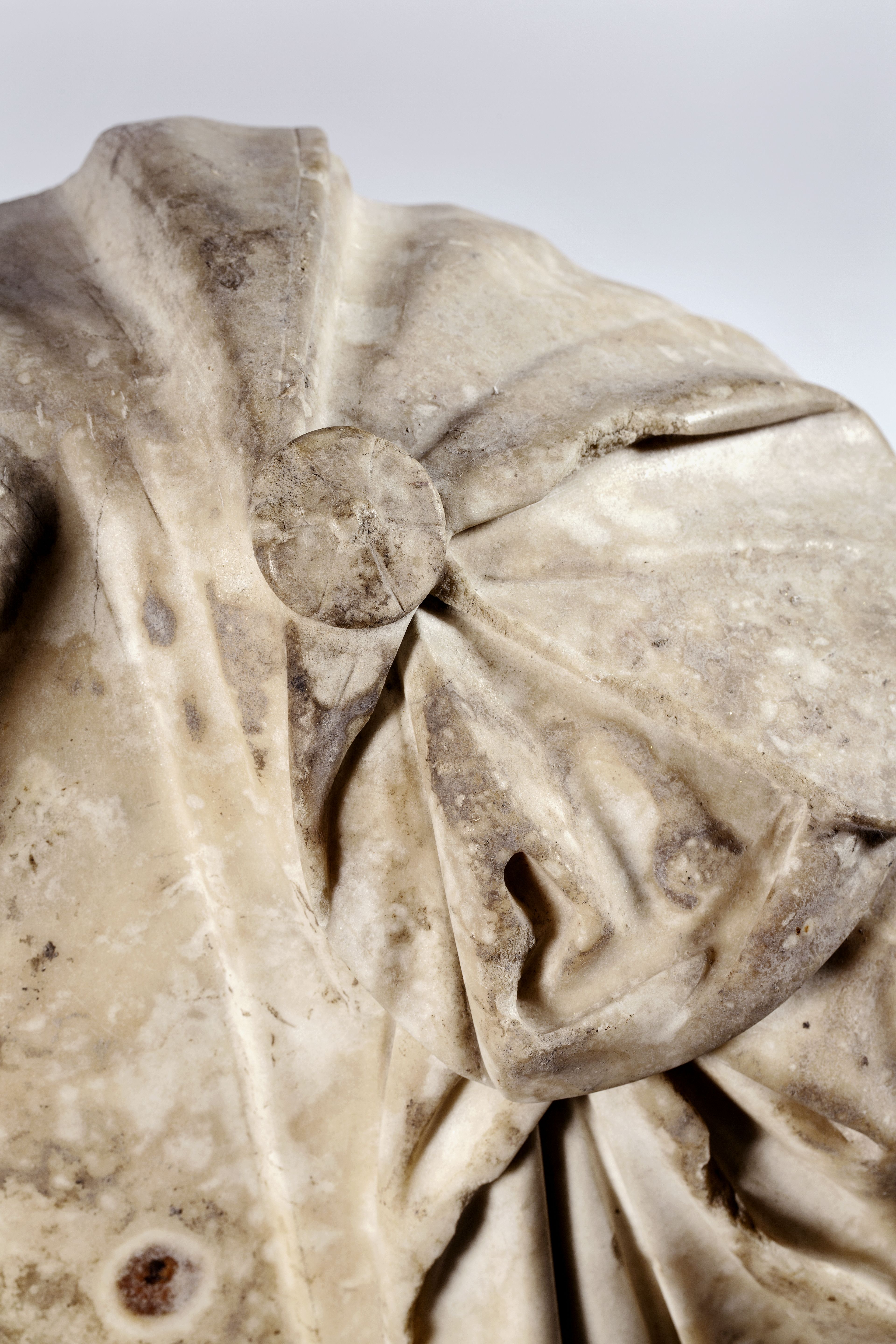 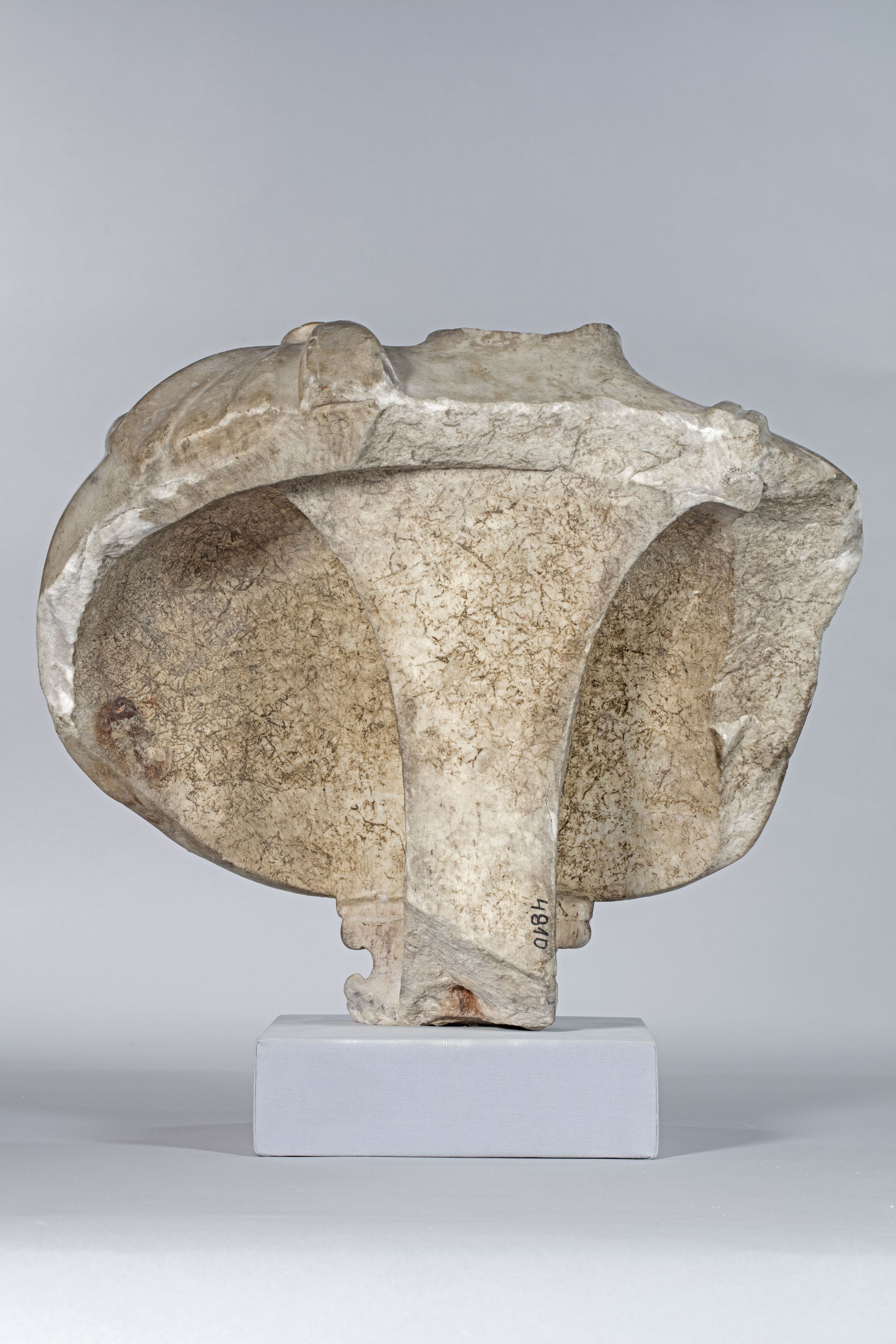 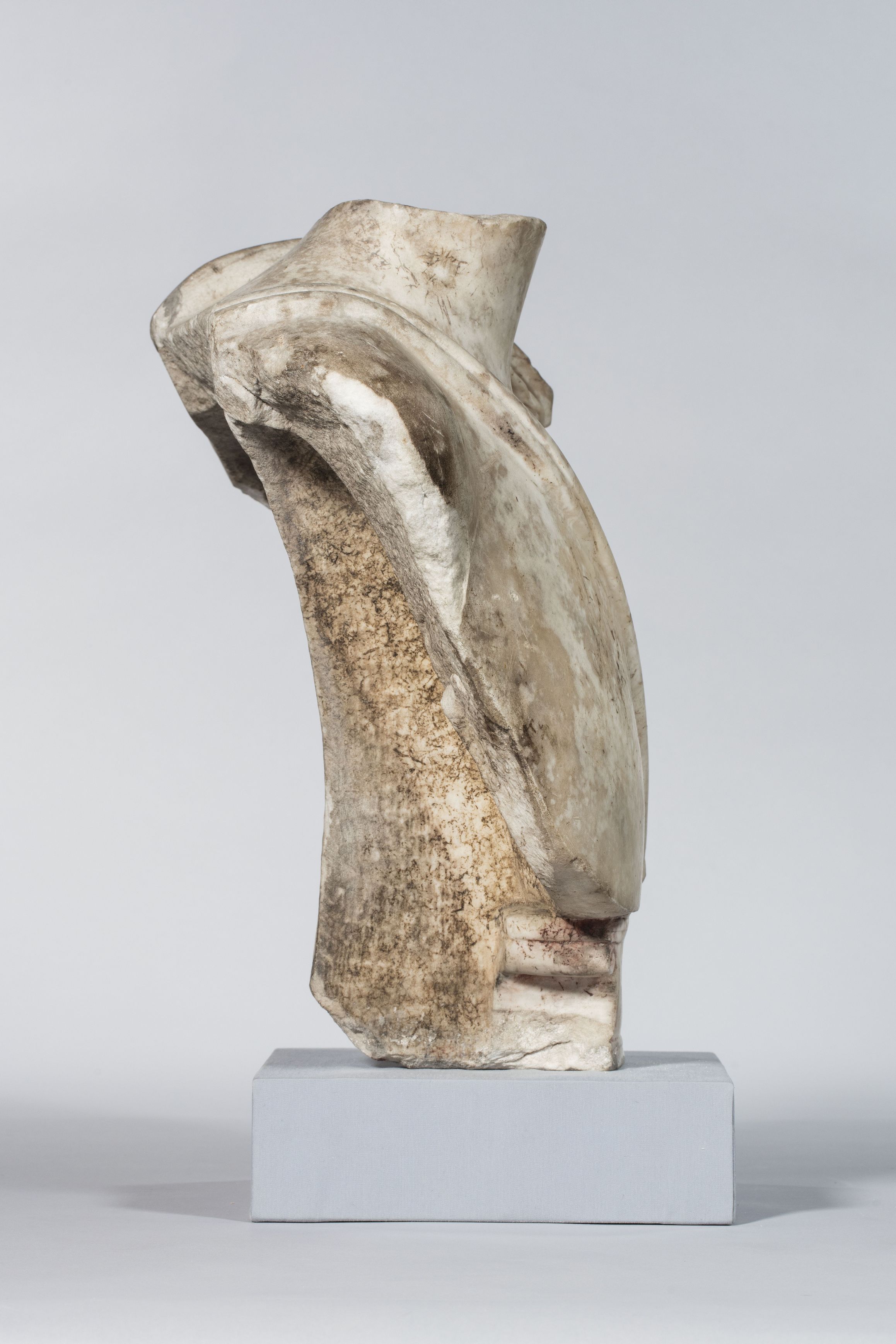 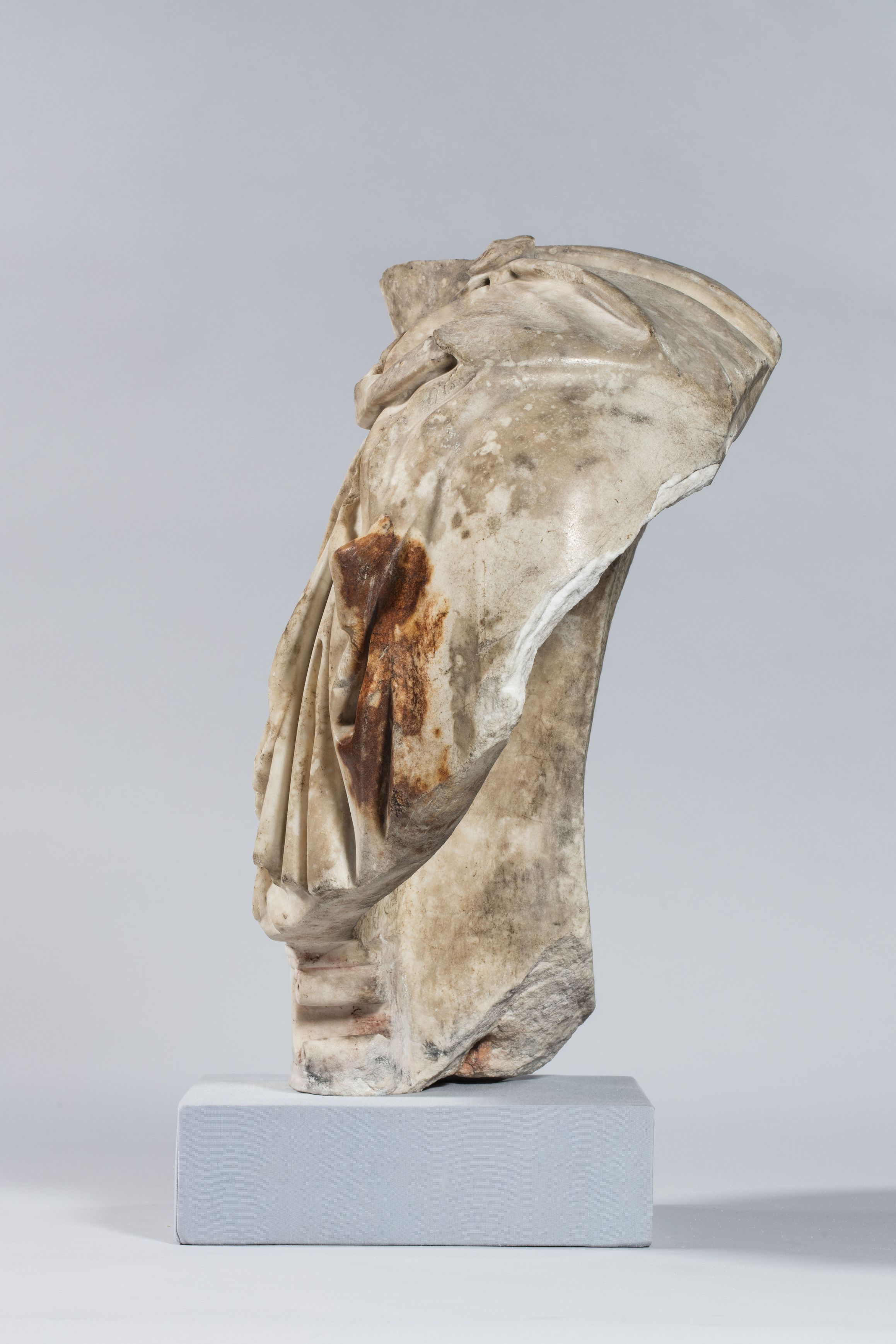 On the reverse of the bust, which is just a few centimeters thick in most parts, a chiseled pillar-like support springs from the top of the trunk (corresponding to the location of the arm sockets) and tapers as it descends to the bottom of the sculpture. This mushroom-like support stabilizes the neck and head atop the upper body. The shape of the support is typical for busts carved in Athenian sculpture workshops of the second and third centuries AD. 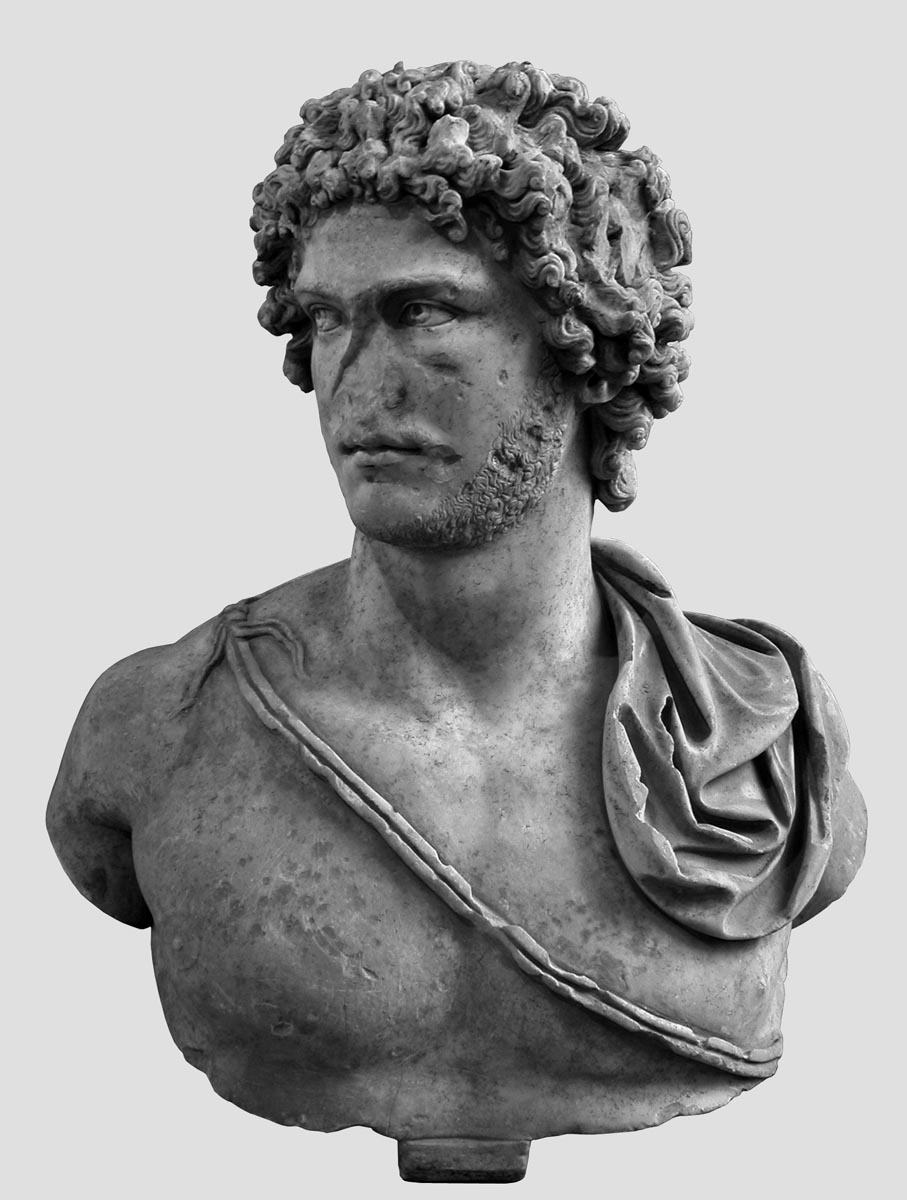 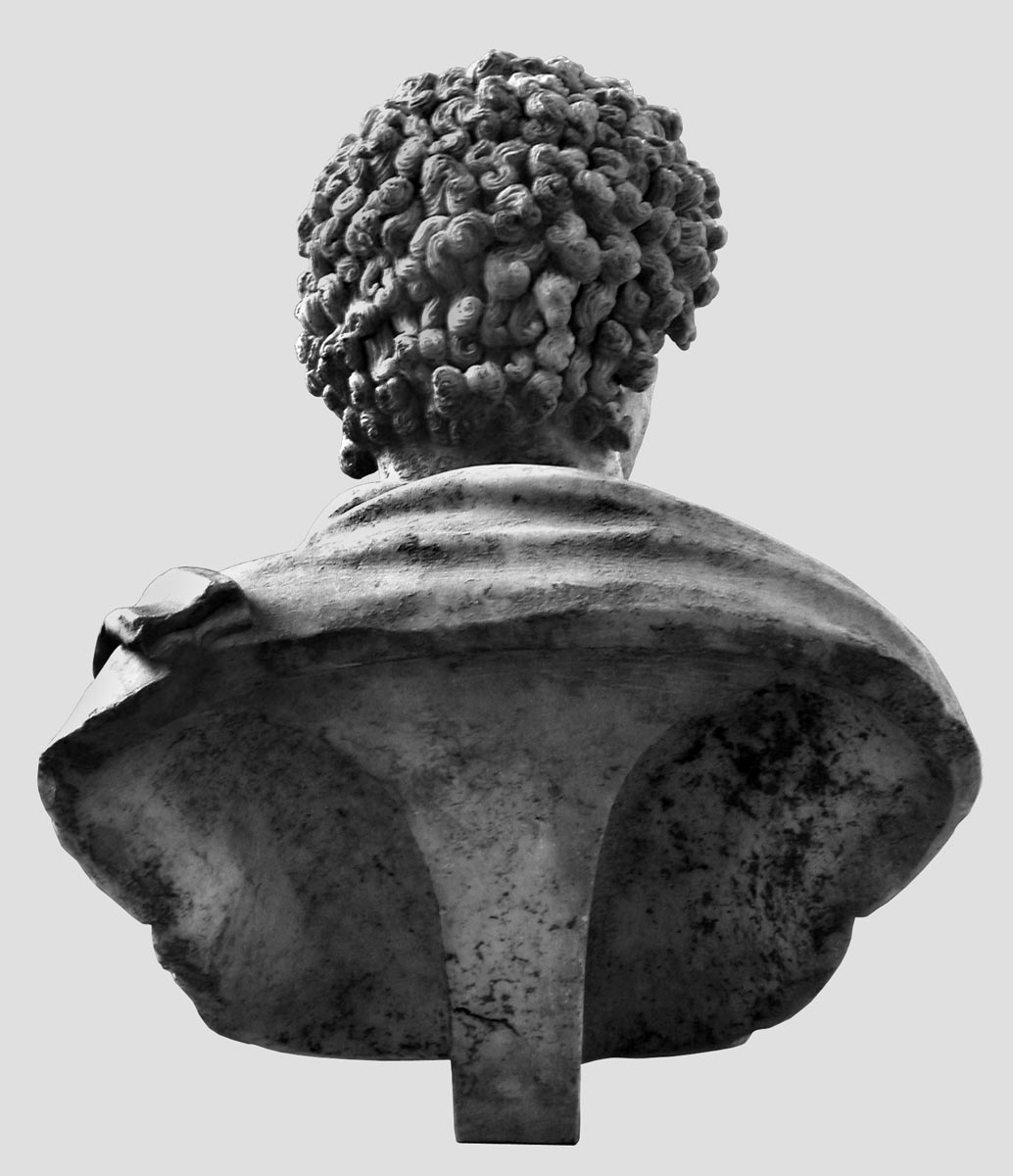 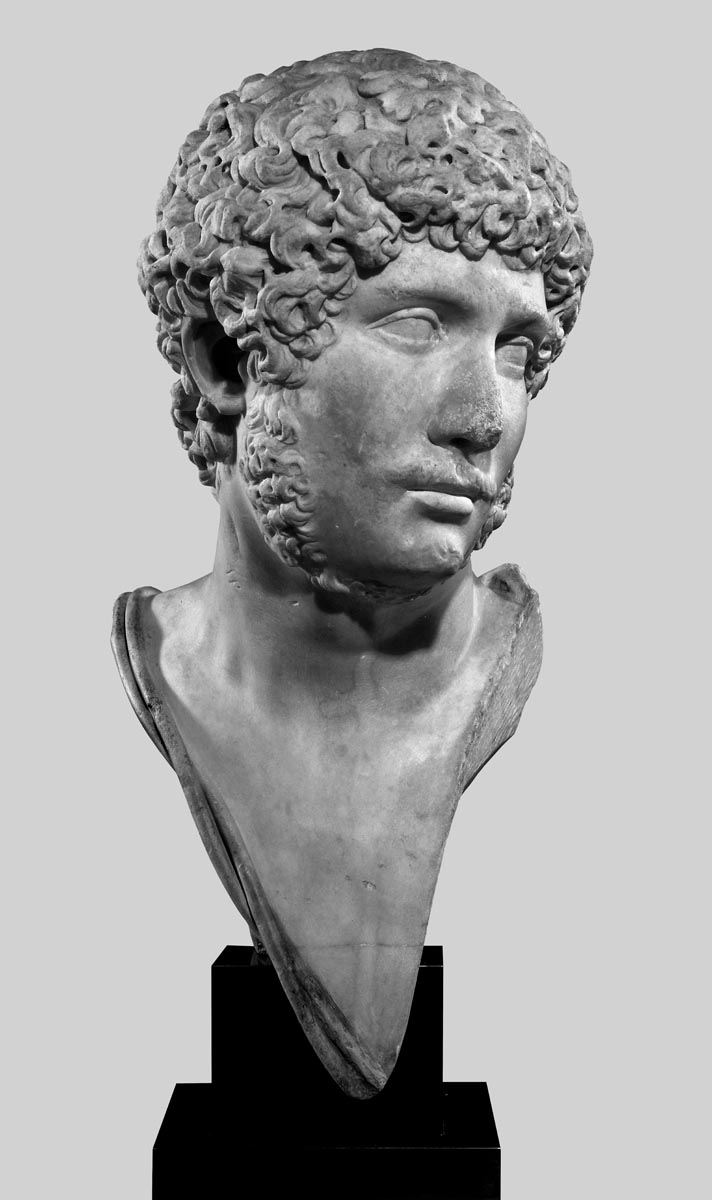 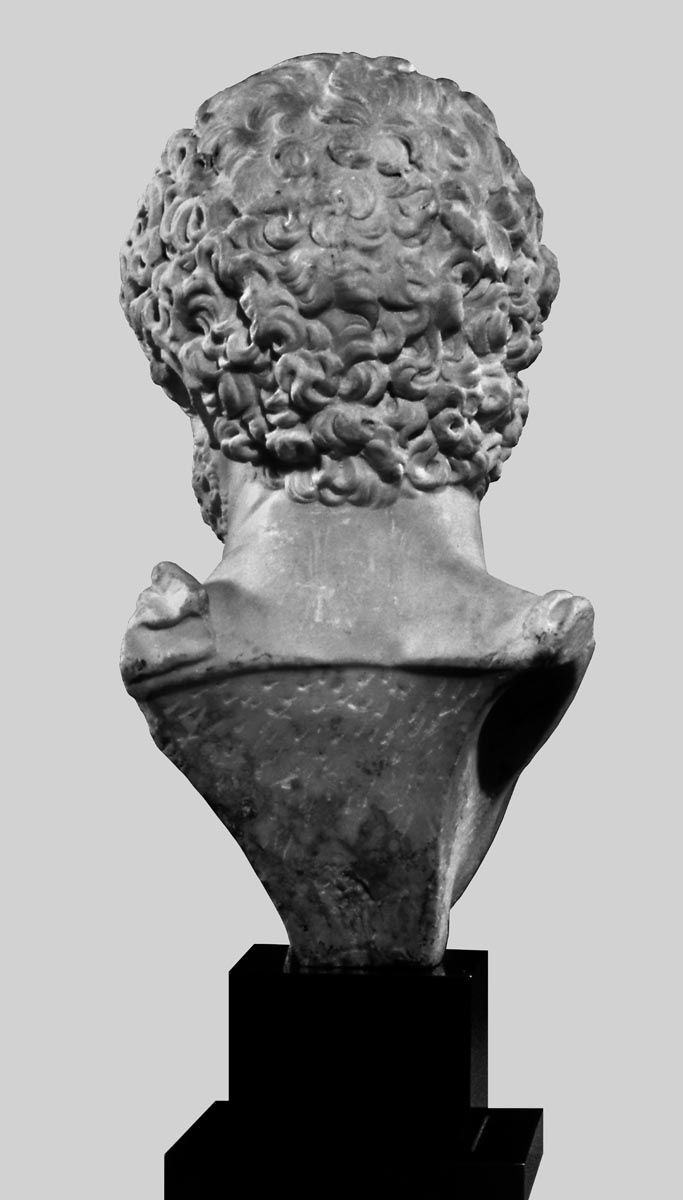 Comparable portrait busts are usually chiseled from Greek – mostly Pentelic, sometimes Parian – marble. But those marbles differ from the fine-grained marble of our bust.

Aphrodisias, Göktepe
Scientific analysis of the marble conducted by Danielle Decrouez in Geneva indicates that this bust was worked from the very fine-grained white marble from a quarry some fifty kilometers south of Aphrodisias in western Asia Minor (modern-day Turkey) at the site of Göktepe. Recent research has shown that the best works of art made in Rome during the second century AD (and again in late antiquity) were produced by sculptors of an Aphrodisian workshop that eventually relocated to metropolitan Rome because of the fame of their high-quality workmanship.
Using marble from their home region that was imported to Rome, the sculptors from Aphrodisias, who sometimes inscribed their signature on their works, specialized in producing statues and portraits for the wealthy Roman upper class, particularly the imperial court, as we know from portraits made from Göktepe marble of the second century AD. These were mostly found in excavations in Rome and from ancient villas owned by emperors or by wealthy members of the Roman elite in the neighboring countryside.

A rare motif: the twisted baldric
The paludamentum on the left shoulder and the baldric are familiar from portrait busts dating from the late first century AD onwards, and this military “look” is common on busts of the second century AD. This choice emphasized the military virtue of the depicted man – even if he never served as a soldier. The strap of the baldric was usually rendered as a broad band, sometimes made from thin material resembling fabric, sometimes thick and suggestive of leather.

A special case is the baldric on a wonderful bust made of Pentelic marble and clearly chiseled in an Athenian workshop as indicated by the bust’s support in the typical “mushroom” form on the back of the sculpture. The baldric consists of two thin parallel textile bands, which are fastened at the shoulder with a Heracles-knot from which the ends of the bands project.
The baldric type on the Budapest bust – two intertwined cords – occurs only on three other busts. All portray the same young man with a thick mass of curly hair and thick sideburns that terminate in a curly beard under the chin at the top of the neck; a few wispy strands of hair above the upper lip and on the tip of the chin complete the look.

Related portrait busts
This portrait type is known from at least four ancient copies, one of which was found in 1954 during excavations of the villa in Tivoli (east of Rome) belonging to the emperor Hadrian.

Because this portrait type with the same kind of hair, sideburns, and facial hair appears together with the name of the emperor Hadrian on gold coins dated to the last year of his reign (137/8 AD) the marble portraits can be identified as those of Hadrian.

As mentioned above, the same portrait type was first minted on coins in Alexandria in 117/8 AD for the young successor of Trajan.
From this evidence, we can conclude that the old emperor Hadrian was depicted as a youthful, heroized general at the end of his life by using a portrait type invented in Egypt for the young prince when he succeeded Trajan on the Roman throne. This is exceptional and the one and only case known of such a “revival” of a portrait type throughout antiquity.
This portrait differs from customary images of Hadrian. Rather than the long, wavy strands of hair ending in curls above the forehead, the hair is styled in many short curls of considerable volume divided by narrow, deep-drilled grooves. This coiffure came into fashion under the Antonine emperors some years after Hadrian’s reign. Thus, the last portrait type of Hadrian, based retrospectively on a provincial invention for the young emperor, set a fashion trend that later persisted for many decades, and was characterized by deeply drilled, curly hair.

By this technique the sculptors aimed to characterize the texture of natural hair by producing a voluminous mass with the effect of light surfaces next to dark shadows. Before, hair was usually rendered by strands with extremely fine lines chiseled into the surface, following the flow of the whisps and lying more closely on the head. Thus the new fashion with the curls divided by deeply drilled grooves created a new impression of the depicted natural material.

Early modern versions of the type
This portrait type of Hadrian is also remarkable in another respect. Many more copies of this portrait head with sideburns and curly hair were produced between the sixteenth and eighteenth centuries AD by Italian sculptors who obviously liked the appearance of a beautiful “dandy”. Such post-antique copies, which were interpreted erroneously by contemporaries as Aelius Verus (father of the later emperor Lucius Verus), are made of Carrara marble and often attached to busts carved of colored stone, which display a cuirass partially covered by a mantle.

The Budapest bust: a portrait of Hadrian around 137/8 AD
Different from the modern copies, the ancient portraits of this type that have undergone marble analysis (16–17) are made of Göktepe marble as is the bust in Budapest (9). One of these, a fragment of a bust with the portrait of the youthful Hadrian wearing a baldric formed by two intertwined cords (17), possesses the same wide support on the back typical of Attic workshops.
From all this evidence we can deduce that the Budapest bust once carried a portrait of the young emperor Hadrian with sideburns terminating as a beard below the chin; and also that the sculpture was produced by an Athenian sculptor using fine-grained Göktepe stone while working in Rome around 137/8 AD.
It is likely that this craftsman was employed in a workshop of Aphrodisian sculptors producing expensive, high-quality works for the imperial court and the wealthy Roman elite. The Athenian sculptor of the Budapest bust seems to have specialized in chiseling wonderful busts of the youthful Hadrian depicted as a Roman general with a baldric and a military commander’s cloak across his shoulder.