The votive terracottas from ancient Medma – today’s Rosarno in South Italy –, are on display until 11 August at the exhibition of Classical Antiquities in the Museum of Fine Arts, Budapest. Our first post on the mini exhibition open since the fall of 2018 introduced the site and its historical context, as well as the religious historical significance of the votive statuettes. Taking a closer look at some of the objects, classical archaeologist Ágnes Bencze, an expert on Medmaean finds, shares her thoughts on the art historical context of the repertoire of Medmaean votive terracottas.

The few decades that witnessed the creation of the most significant group of votive terracottas in the Calderazzo sanctuary in Medma, roughly between 490/480 and 460/450 BC, were a crucial period in the history of the Greek world. The novel historical setting that arose following the Persians invasions and their heroic repulsion saw the emergence of a new mentality concerning concepts of individuality and community, alliance and adversaries, or right and wrong in a moral sense. Through the Greeks, this mentality has held valid for the entire Western civilisation up to our own days. Scholars of Greek art observe an equally crucial change in the world of visual expression: an irreversible transformation of the way of looking at figures. The statues in Greek temples and sanctuaries, as well as the painted figures decorating the vases attest to a new visual language that developed from the traditions of the preceding centuries: the emergence of forms and proportions that the modern viewer immediately recognises as Classical. The decades of transition, leading from the Archaic, i.e. “older” period of Greek art, closely related in its attitude to the art of the ancient Near East, towards the age we call Classical, are conventionally labelled the age of the Severe Style.

Finds from Medma (as well as from Lokroi and Hipponion) show that in the Severe Style period, citizens of the South Italian poleis were fully acquainted with the changes that took place in the main centres of Greek art, and were eager to reflect the subjects and forms mirroring these new trends in their local sanctuaries. This can only be deduced from the surviving material remains, first of all the group of terracotta votive statuettes. Since we have hardly any knowledge about who made these objects, how they were created, and by how many artists, we do not have definitive answers for the most arresting questions. If a new theme became fashionable in Athens, how and by whose transmission did it reach the citizens of Lokroi and its twin cities? If a sculptor with innovative ideas was active in one of the great sanctuaries that was visited from all over the Greek world, who helped to spread his innovations in the sanctuaries of a lesser polis, in the design of statuettes offered to the local divinities? Did great artists travel “overseas” or was it their disciples and apprentices who took commissions from other cities as well? Or was there a leading artist among the artisans of Lokroi, Medma and Hipponion who had been to Athens, Olympia and the Aegean islands to master his profession? Lacking relevant written sources, most of our assumptions must again rest on the objects themselves. 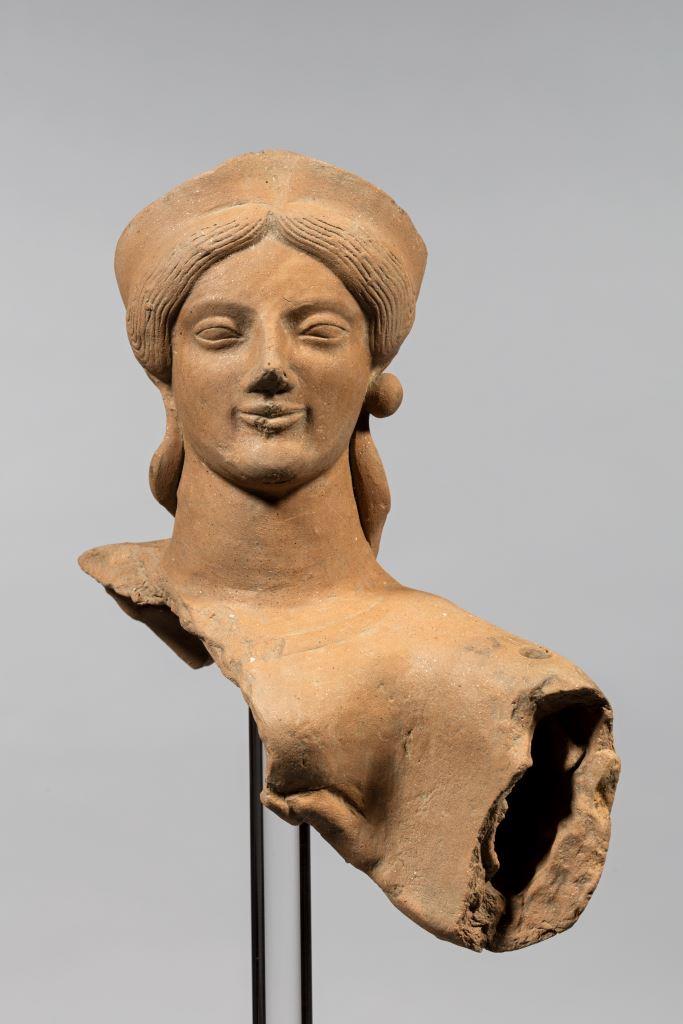 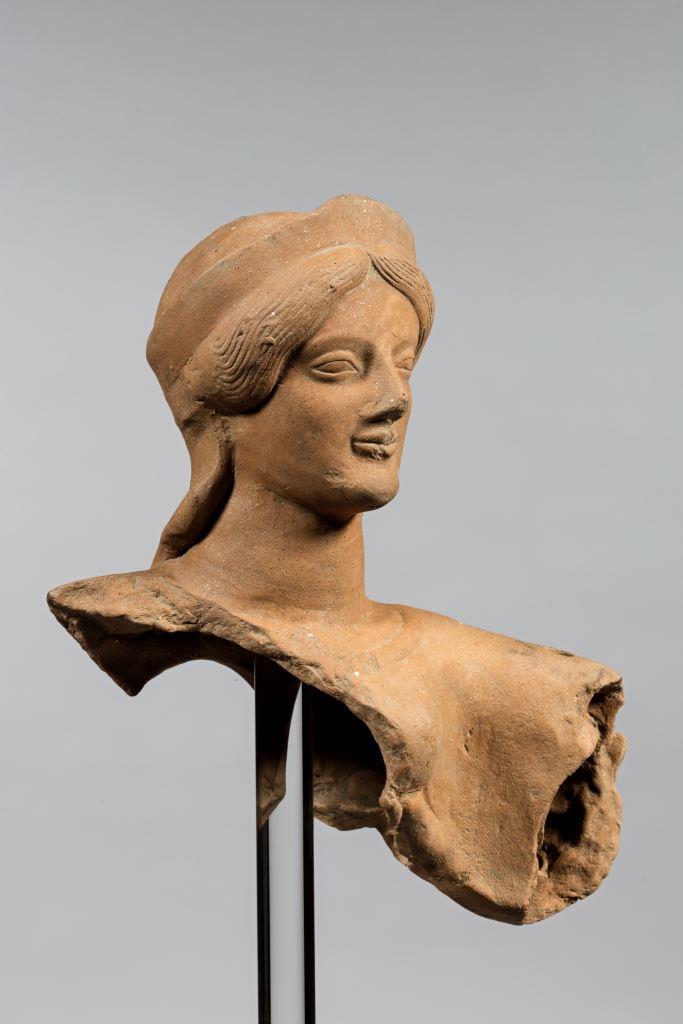 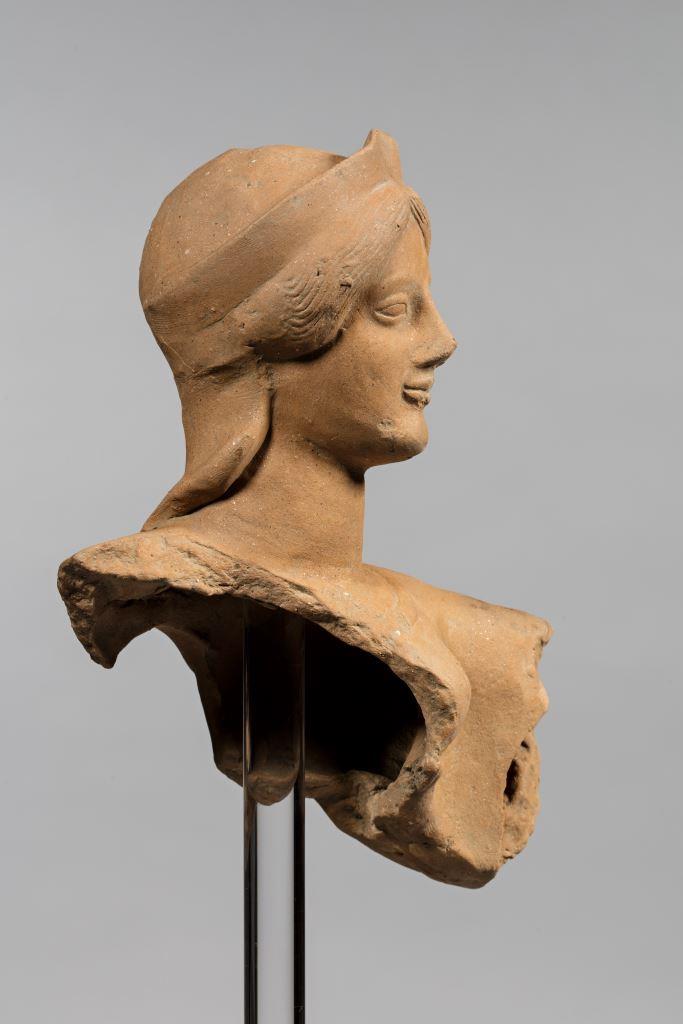 Even despite its fragmentary condition, it is clear that this statuette held characteristic attributes. It shows a figure in movement: the fully armed Pallas Athena, well known from Athenian vases created at the end of the sixth and the first half of the fifth centuries BC. Her headdress is a concise representation of a helmet, which was complemented with a crest, as the hole drilled at the top of the head suggests. The cloak covering her chest and shoulders is the aigis, the special protective gear which was used jointly by the warrior goddess and her father, Zeus, and which is represented either as a shield, or – like here – as a piece of clothing spread over the shoulders. Like all other representations in the round from the period, this statuette was once also painted with vivid colours: the now gone decoration must have shown the shield-combined-cloak covered with scales and bordered with snakes. As regards her posture, even the fragment makes it clear that the statuette showed Athena in attack, with the left foot forward, the left hand probably holding a shield, the right hand lifting a spear, ready for fight.

In poetic descriptions, Athena was represented this way already in Homer’s Iliad, but in sculptural representations the goddess only began to appear in this scheme in sixth century BC Athens. The Athena statuette from Medma has its closest parallels in bronze figurines made between 530 and 470 BC and found at the Acropolis of Athens. These were also votive offerings, and were modelled – in part at least – after large scale sculptures, most probably statues of the fighting Athena that appeared on temple pediments in the late sixth century BC. The most famous and relatively well preserved example of the latter is the figure of Athena fighting the giants on her “earlier” temple at the Athenian Acropolis (the one preceding the Persian Wars). Closest in treatment to the Medmaean Athena is an Athenian bronze statuette, which, according to its inscription, was offered to the goddess by a woman called Meleso, and may have been created as late as the decade between 480 and 470 BC. With their stout, balanced forms and simple, linear contours, both statuettes – the Athenian and the South Italian one alike – are related to an artistic idiom that is manifest in the Athena figures standing at the centre of the pediments of the famous Temple of Aphaia on Aigina.

The large female busts and their fragments, the elaborately modelled heads constitute a spectacular group among the votive terracottas of Medma. The two pieces exhibited in Budapest suggest that the treatment of the female head in this group often followed the models of large-scale statuary, and that these statues inspired coroplasts in different ways. 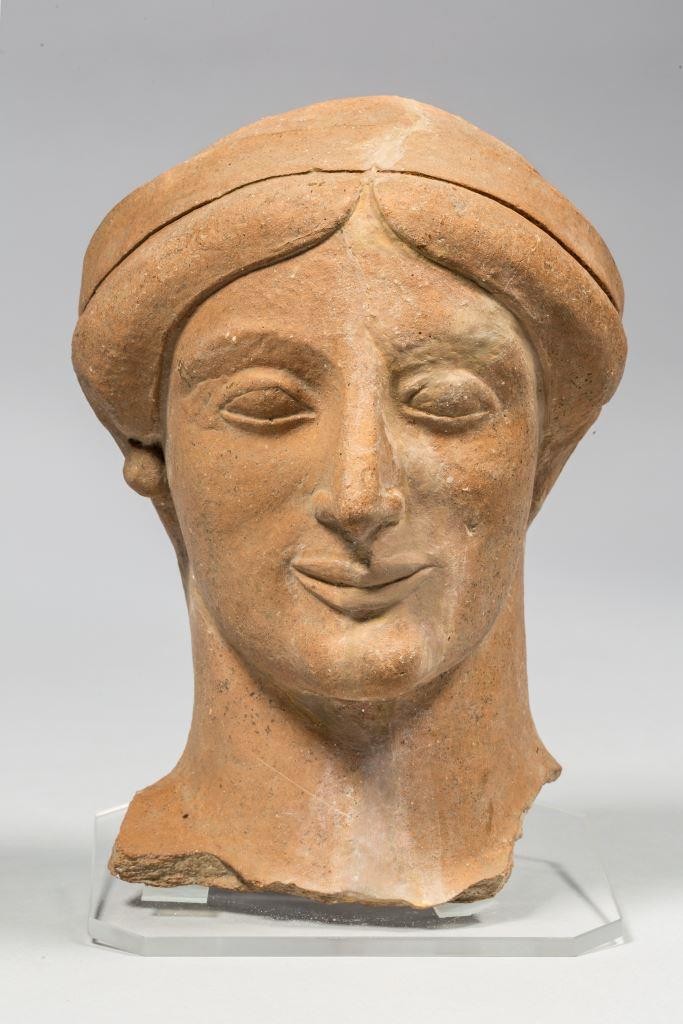 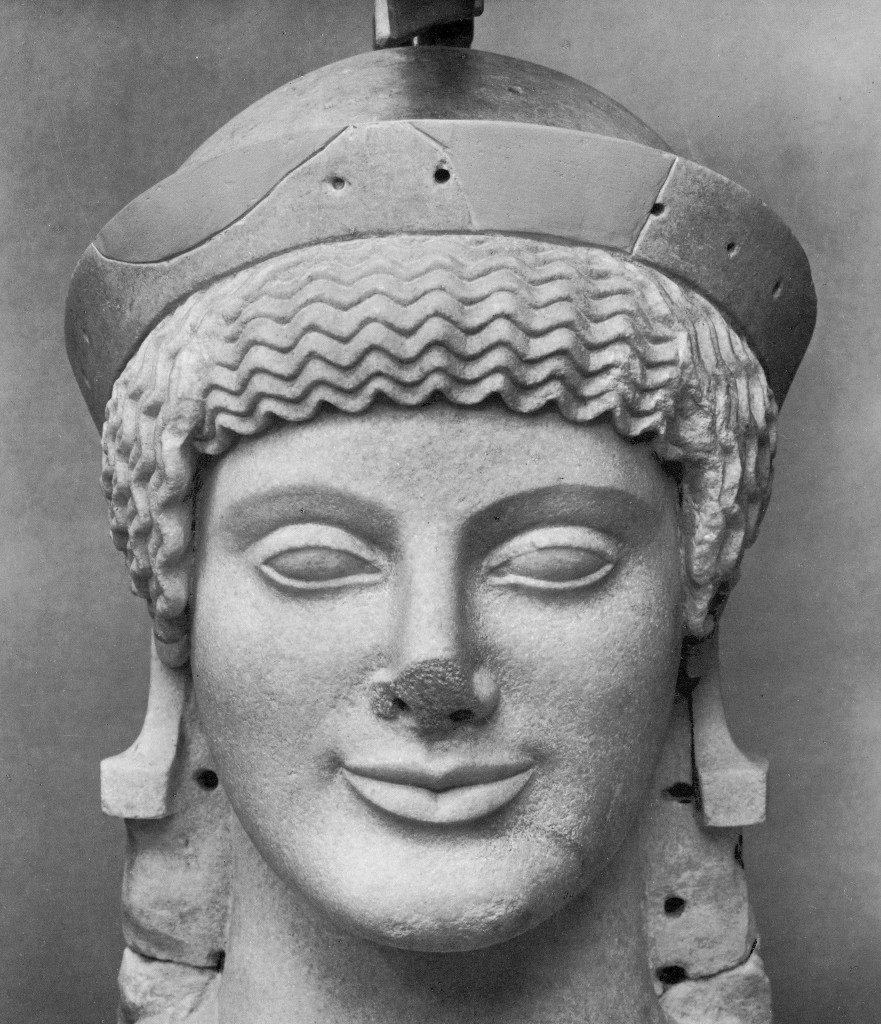 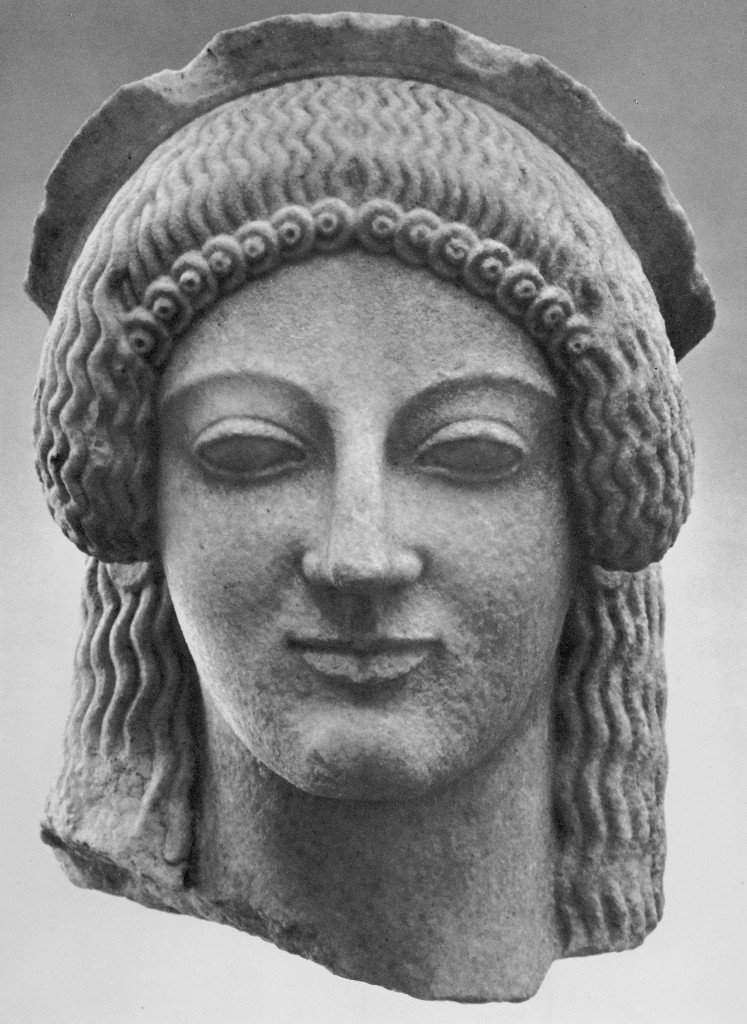 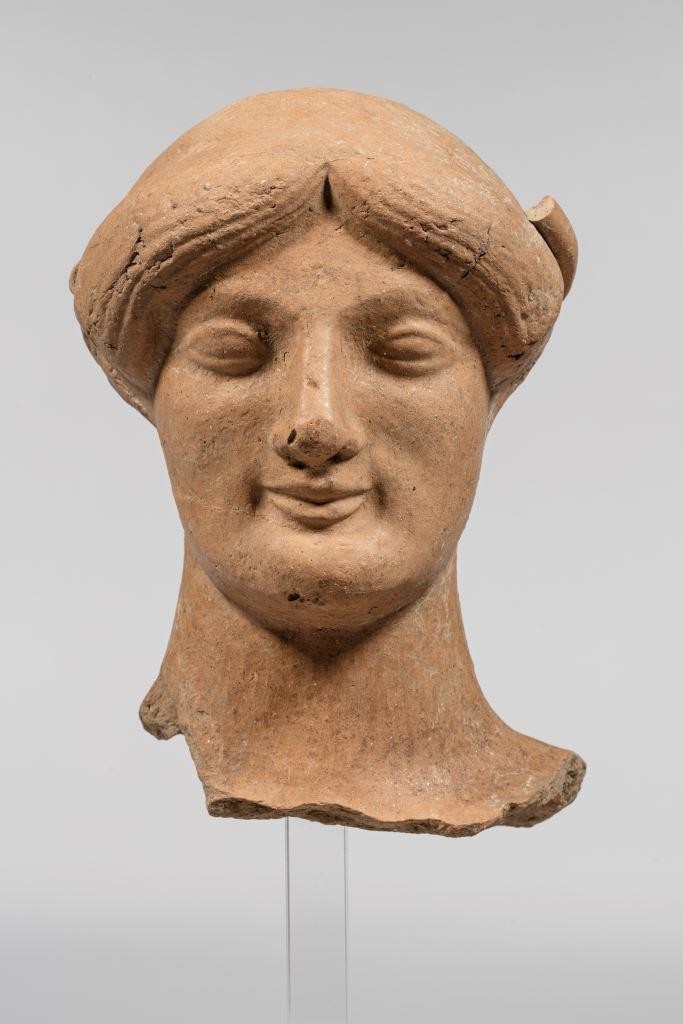 The relation to large scale sculpture is more obvious in the case of the head at the top. The source of the model is again Aigina, an island in the vicinity of Attica, which was a proud rival of Athens at the time. Ancient literature conspicuously often mentions the famous sculptors of Aigina, who – as the written sources suggest – were not only active on their own island, but across the Greek world, especially in the first half of the fifth century BC. Perhaps some of the masterworks of the time can be linked to these great artists, but our present knowledge does not allow for secure conclusions on the question. In the early nineteenth century the remains of a monumental temple decorated with many statues were discovered on the island of Aigina. Whether they were made during the Persian Wars, or directly after, the fragments of the sculptural decoration of the Aigina pediments are important components of the image we have about the sculpture of the Severe Style. The way of constructing the human face, illustrated by one of the Medmaean terracottas (above) recalls this milieu, the figures of the Temple of Aphaia at Aigina. The other head (below), even though it is of the same size and of roughly the same structure, transforms the large scale model with more freedom, in a more delicate way. But it is also possible that its creator followed a different model, perhaps related to, but slightly later than the sculptures of the Temple of Aphaia. Whatever the case, the artist in Medma followed a tradition in which sculptors developed their own artistic language during the decades of the Severe Style in rivalry with the Athenians.

Drapery from Medma and Olympia

The standing female figure formulates another, frequent subject of the Medmaean terracottas, the standing, draped maiden a bit differently than its direct predecessors (cf. no. 3). Its most noteworthy detail is the mantle that covers large part of the body, with the richly draped undergarment, the chiton emerging underneath, at the right shoulder and above the feet. Most of the body disappears underneath the mantle, which seems to be freely designed as opposed to a conventional repetition of the drapery schemes fashionable since the late sixth century BC. It is as if the artist – instead of following earlier designs – himself imagined, or used a live model to shape the draped female figure, her hand underneath the mantle delicately lifting the undergarment as she steps forward. In the one and a half centuries to follow, Greek sculptors, both of small and large figures, experimented in masterful ways with lifelike representations of the draped female figure, but in the first half of the fifth century BC this approach was still a surprising novelty, especially in a workshop of votive terracottas. Whether the draped maiden from Medma had a direct, precise model or not, the way the coroplast gave the drapery a design that was closer to life than what was allowed by earlier conventions, is again familiar from a Greek masterwork of the period: the mantles of the statues on the pediment of the Temple of Zeus at Olympia, the most significant large scale statuary in the 460s BC, were designed with the same method: by pleating the tiny, fragmentary, arched folds of a thicker drapery in a seemingly haphazard arrangement. This characteristic treatment of the drapery is one of the most crucial differences that separate early classical sculptures from the artworks of the preceding period. It may have been the invention of an innovative sculptor of marble (perhaps at the island of Paros famed both for its marble and for its sculptors). Others think the secret lies within the fact that by this time sculptors tested the compositions of larger sculptural groups with clay models before carving them in marble, which led to the discovery of effects that are closer to the real nature of softer materials.

The forms and variations of the Medmaean terracottas are documents of the pioneering period that paved the way for classical Greek art. At the same time they also show us – if not with the details of everyday life – how a lesser polis in South Italy could connect to Greek culture, and how it transformed the chief artistic trends according to the local tastes.